This weekend I re-watched Mystic Pizza and noticed Matt Damon makes an appearance in the movie: 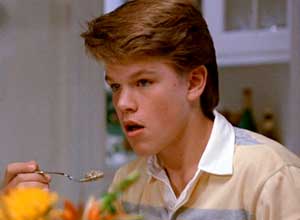 What struck me about this is the “you-never-know” factor. Here Damon only had a line or two in a movie with Julia Roberts before she was famous. When they did their scene do you think either could anticipate Julia Roberts would become one of the highest-paid actresses in Hollywood, or that Matt Damon would become a heartthrob? No. They were just doing a scene, following their passion and then BOOM, their fame exploded like a starburst. For Roberts it took another two years with the release of “Pretty Woman.” For Damon it took another nine with the release of “Good Will Hunting.”

What I love about this, what I find so inspiring, is that moment before they were famous. Why did it take two years for Roberts and nine years for Damon? What made each of those films “the one” that made them a star? Sometimes I take it for granted that people weren’t always famous. That Matt Damon hasn’t forever been glossing magazine covers, that there was a point where he was a normal guy, playing bit parts, trying to make ends meet, and then the stars aligned, he had the right connections, and all of a sudden he became a household name.

I find this incredibly fascinating because we could all be on the brink of something and we just don’t know. I could film my niece singing a rap song and she could become a youtube star. Joe Schmo could have an asteroid land in his yard that’s covered with a key ingredient to eradicate AIDS. Little Susie Ray could go to the mall and be spotted by a model scout and start walking runways. In life we have no idea what’s around the corner and how big it can become, and that’s what’s so interesting to me.

I dream of a world where we live each day with a sense of wonder and mystery because we remember we have no idea what’s next. A world where we keep pursuing our dreams even when it seems like they’ll lead to nowhere. A world where we are open and honest with ourselves and allow whatever will be to be.