So often I’ve heard “celebrities: they’re just like us,” but never quite believed it. In my mind there was always something “special” about a celebrity because they were famous and fame seems to be a very capricious thing – it’s not as if you go to school and can become a celebrity. This week I had the good fortune of spending time with two celebrities and have come to the conclusion I don’t know why some people become doctors either, but that doesn’t mean they’re more “special” than I am.

Years ago I would have regaled you with stories of hanging out with someone famous because I wanted to impress you. I wanted to show I was “important” because I knew a celebrity. Today, instead I find myself relating to those around me, understanding no one is that different, whether they’re famous or not. That I can do what they do, and in fact, I am. 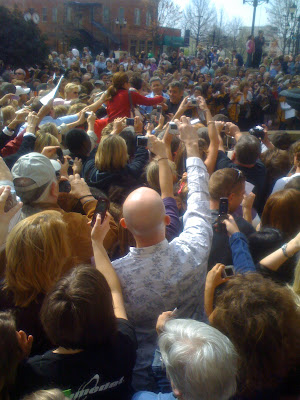 Do you know how hard it is to find a stock photo of a fake celebrity signing autographs? Answer: very difficult. At least in this one the star is not so obvious.

So to back up a bit, I had the opportunity to be a part of an interview with Marianne Williamson. As in the woman who wrote, A Return to Love. As in the woman who I’ve quoted a jillion times in this blog. Yes. I have no idea how it happened but I am so glad it did. I have put this woman and others like her on a pedestal believing they were gifted with something I was not. Believing they must have been graced with something in order to do what they do. Meeting Marianne and seeing her speak showed me how false that is.

Don’t get me wrong, she is an amazing speaker and she obviously taps into divine consciousness in her talks but you know what? So does anyone who’s creative and has something to say. There’s nothing so very different about us. She’s a person just like I am. She gets spider bites and a dry throat and unruly hair. We are absolutely cut from the same cloth and that cloth is “human.”

What I also find interesting is “celebrity” is really about the beholder. On Tuesday I had dinner with Raymond Bagatsing, a Filipino actor I love. He said we wouldn’t be able to have the same experience in the Philippines because everybody would be looking at him and people would be mobbing the table. He didn’t say it to brag, nor to lament his life and his fans, he said it very matter-of-factly. Yet here in the States, nobody knows him from Adam. Obviously celebrity isn’t really about the person who’s famous, it’s about the people who are viewing them. It’s us that put people on pedestals. It’s us who think somebody is special and amazing. It’s us who turn that person into someone they’re most likely not. Because honestly, Raymond and Marianne are just doing their thing.

Previous: Seeing What is Given

Next: The Power of One