If you've met me in person (or even if you haven't, actually) you know I'm like a frantic "little engine that could." I-think-I-can-I-think-I-can do any and all projects until my poor little engine starts short circuiting. So much so that even the hum of a refrigerator gets on my nerves.

Now that I'm in Arizona I've had to change my "I think I can" motto to, "I think I won't." It is so very hard to convince myself to do nothing. To rest. To relax. To lie on a pool flotation device and dabble my fingers in the water. I'd much rather be swimming laps or responding to e-mails or doing something productive. My little workaholic is horrified at the idea of spending an entire month lounging around and resting. What value is there in resting? What am I accomplishing by resting? There are no awards given for it. No gold stars, no praise. 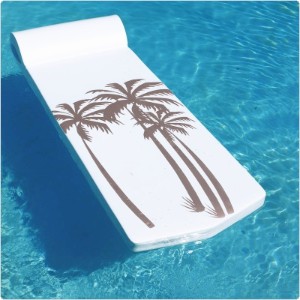 I floated on one of these today.

I mention all this not to throw a pity party but because this is seriously imbalanced. Rest is just as important as work. (I have to admit a part of my brain just said, "Yeah right.") Without rest my body, my brain, my life all start to deteriorate. And I'm not just talking about getting eight hours a sleep each night. I mean taking time out to do nothing. Having a day where I don't leave the house and don't accomplish anything of merit.

When I rest it says, "I matter. I'm worth taking care of." When I throw myself into activity after activity it sends the message other people are more important than me. World issues are more important than me. But they're not. I'm not of use to anyone as I am right now — so dysfunctional I startle at every low, deep noise. So tired even after being awake for four hours I want a nap. I'm not blaming or chastising myself. This is the way it's been but I am making a conscious decision to change all that. I made a decision to put my health first the minute I said, "Sure, I'll housesit in Arizona."

There is value in doing nothing. There are three aspects to life: work, rest, and play. Neither should overpower any of the others because if they do life will become unmanageable. I'd rather not keep going down this road, thank you. Instead, I vow to do nothing.

Previous: Goodbye for a While

Next: Bring Out the Inner Warrior