I have a slight phobia of wheels. Roller skates, bicycles, cars, scooters – all of them scare me; not as a passenger, but when I’m in charge, heck yeah. My heart starts to pound and my rational brain leaves the building. It’s hard for me to concentrate, to remember all the little things that come so naturally to many. It would be great if a phobia was like other fears in that it abates the more often you engage with whatever it is you’re afraid of, but it’s not.

“[A phobia is] a persistent fear of an object or situation in which the sufferer commits to great lengths in avoiding, typically disproportional to the actual danger posed, often being recognized as irrational. In the event the phobia cannot be avoided entirely, the sufferer will endure the situation or object with marked distress.”

This means that it doesn’t matter how often I drive a car (and I have — I’ve owned two cars, driven across the country, driven long distances by myself, driven in cities, etc.), the fear never goes away. It may lessen, but it’s ever present. I bring all this up because last week I bought this bad boy: 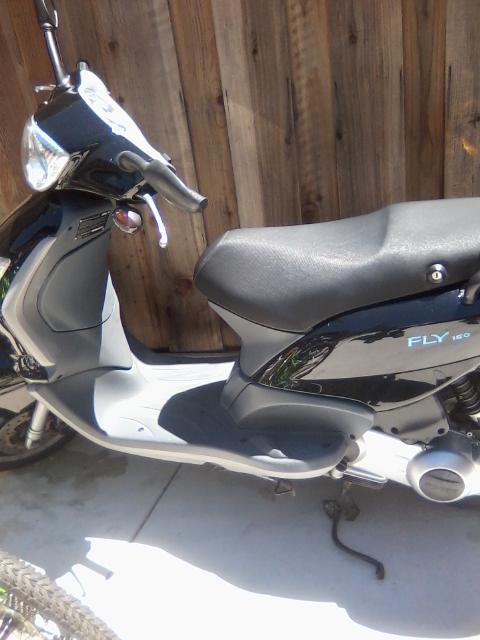 My new scooter! Ain’t it pretty?

For those of you who can’t tell, that’s a Piaggio Fly 150 scooter. Last week I moved to a quiet, safe neighborhood just over the Oakland hills that necessitates I have wheels of some kind. Because I can’t afford a car, voila, a scooter. I like riding my scooter; it’s fun, but it’s also scary because of my phobia to operating wheels. I’m putting a lot of pressure on myself to ride further and faster than I’m comfortable with because I kind of have to. The closest bus stop is a mile and a half away, and the closest BART station (the train system for those of you who don’t know) is six miles away.

In our culture of “just do it,” I feel like I should be able to “get over” my fear and drive the thing in heavy traffic and be completely fine. That I should be able to drive to the BART station no problem. But it is. I can’t force myself to be ready when I’m not. Yes, there is such a thing as paralysis, of complete avoidance, but there’s also such a thing as pushing myself too fast too far. I’m taking my scooter out every day to feel more comfortable handling it, to build up my confidence, but there’s no need to rush.

I bring this up because perhaps you feel like you “should” be somewhere you’re not. That you “should” quit your job already, or move, or be ready for another relationship, or whatever. I’m here to tell you (and me) it’s OK if you’re not. You don’t have to be ready faster than you are. It’s fine to go at your own pace and do things when you’re really ready. Yesterday I rode my scooter all the way to the grocery store because I was ready. I was afraid, but I was also ready to push myself to that limit. Instead of embracing the philosophy, “Ready or not, here I come!” I’m embracing the philosophy of gentleness, of going slowly at my own pace, because I’m not ready yet to go certain distances, but I know I will be.

Next: Power to the Present