How to Be Fearless

Fear is an interesting emotion. In our society, we treat it like a plague – something to cure, attack, avoid. We say, “Screw fear,” or, “Don’t let fear get in the way.” Oftentimes our message about fear is simpler: “Don’t be scared,” as if telling someone to stop being scared could stop them.

In my own relationship with fear, I’ve also treated it like an annoying inconvenience, or an enemy to defeat. For many years I used food to anesthetize myself. Or I escaped into fantasy, books, movies, television. When I realized none of those things would fix my fear, I started using other methods like affirmations, tapping, visualization, etc. Basically, whatever I could do to not feel afraid, I did. And every time I realized fear hadn’t left, I felt discouraged, disappointed, as if I’d failed. As if fear had won and thus I’d lost. 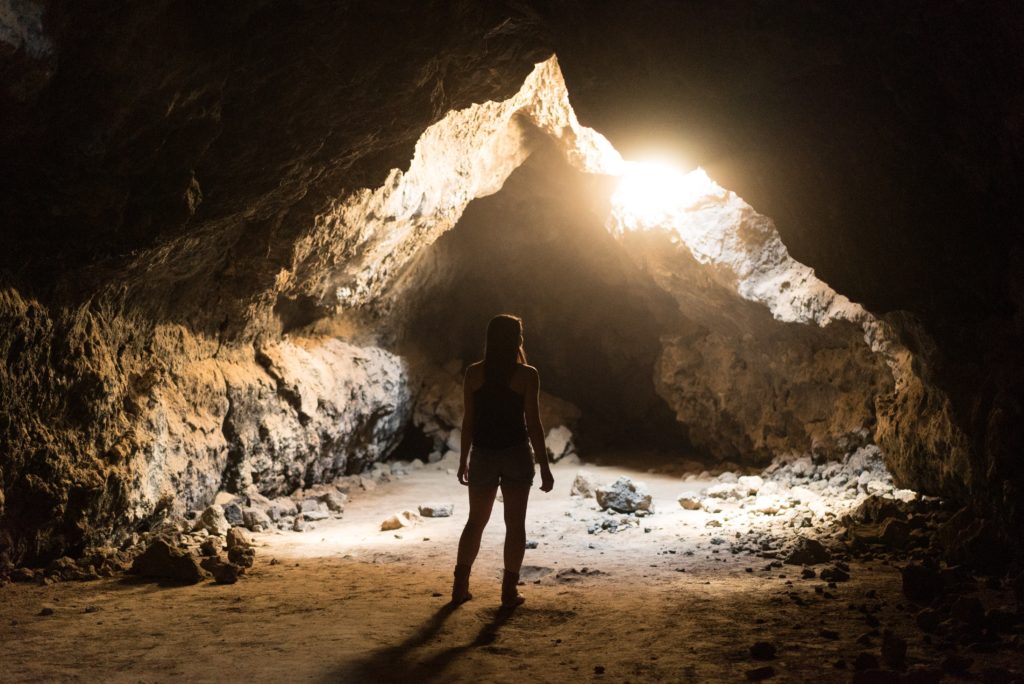 We must enter the cave that we fear. Photo by Joshua Sortino on Unsplash.

The other week, intense fear reared its head in response to the fires north of me. I could see smoke drifting into San Francisco and some days it wafted into Oakland as well, creating a preternatural calm, a sun so hazy and orange I could look at it directly. Fear came up for many reasons, one of them an acute sense of powerlessness. I bought a mask to protect my lungs from the smoke, but I couldn’t control whether the air remained smoky.

In my therapy session, I noticed I wanted my therapist to fix and solve my fear. I wanted him to take it away from me, to make it better. Instead he suggested I sit with it. I’m not sure what happened in the session because days prior I tried the same thing and just couldn’t, but during the session I finally stayed still. I let fear wash over me saying, “It’s OK. It’s OK that you feel afraid. It makes sense. It’s understandable.” For two days, fear erupted from me like a volcano, not due to any thoughts in particular, rather the feeling of fear itself. My heart palpitated, my breathing quickened. I tried all my usual tricks to no avail until I again said, “OK. I’m here with you. I won’t leave you alone with your fear.” And then at group meditation last week I said to my fearful part, “Not only is it OK that you’re here, but also, I love you,” and that brought on the tears.

All every part of me wants is love and presence. I can’t ditch fear and anxiety. As a human being I will inevitably feel scared and anxious again, but since I said, “I love you” to my fearful part, I feel fearless. Not because I’m without fear, but rather because I know when fear pops up again, I’ll allow it, I’ll sit with it, and I’ll say I love you. And then the fear will pass like a storm cloud.

My spiritual teacher says if a person takes shelter in the divine, one need not be afraid of anything. He says, “[F]ear requires two entities for its expression – the one who fears and the cause of fear. Where there is only One entity, because there can be no cause, fear cannot exist.”

In the past, I would have taken that to mean I’m not meditating enough because I still have fears. For today at least, I’m recognizing by loving my fearful self, I am taking shelter in the Cosmic Consciousness. I’m recognizing this fear, too, is a part of me, a part of God, and the way to dissolve fear is by showering it with love.

Previous: The Power of Humility

Next: Love Me, Too