At the end of January, the Onion had an article about a woman who said “sorry” 118 times for things such as bumping into an inanimate object or passing a coworker in the hall. The article is funny because there’s an element of truth to it; many women behave in the same way. I do too, not only apologize for things I don’t need to apologize for, but also assume fault, that I am to blame even if I’m not. If something’s not working properly I’ll say it’s because I did something wrong. 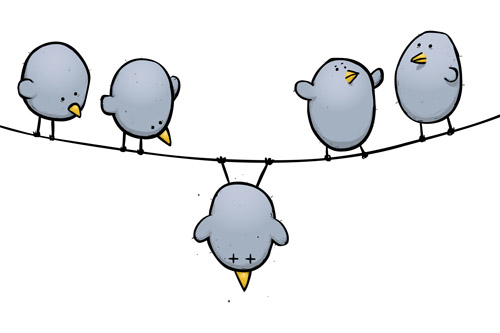 What does this image have to do with the theme “it’s not me?” I’m not sure but it’s quirky and I like it!

For the past month, every Sunday at 10 p.m. my internet has stopped working until about 11:30 or so. First, I called Comcast about it and they said there are no problems on their end. Then, I emailed the management company because my complex has commercial internet, thus I share it with several others. The timing I find incredibly annoying because around 10 p.m. on Sundays is precisely when I usually try to post this blog! And, I can’t go to sleep until I’ve done so, thus the longer it takes the internet to start working again, the later I go to bed.

When I spoke to the management company about the problem, their response was “You’re the only one who’s complaining so the problem must be your equipment.” Um, no.  I could see maybe having an issue with my super old, personal laptop but all of my devices being unable to connect? Even the new ones? I refused to believe the fault was mine even though everyone kept trying to pin it on me.

Finally, I asked the hive mind (aka, facebook) and my tech friends suggested someone was probably downloading movies at precisely that time and hogging up the bandwidth so no one else could use the internet. Ah, vindication. I cannot describe to you the relief I felt after hearing the fault was not mine even though the management, the owners, and Comcast kept saying it was. It would have been very easy for me to blame myself, blame my equipment, accept the problem as being mine alone, but I didn’t. I knew everyone else was wrong and stuck to my guns. I knew I and my equipment were not to blame.

It turns out lately other people have been complaining too because now the internet hasn’t been working for anyone. As a consequence, the management company is changing the network password and upgrading our equipment so hopefully things will improve for us all.

It’s a small example, but I like to believe by speaking up I improved the situation for everyone. Because so many of us complained, the management is doing something. I wonder what would have happened if I stayed quiet and assumed I (or my belongings) were the problem. It’s not always easy to speak up, to go against the grain, to hold fast to what we know to be true, but I have to believe it’s worth it because in the end things improve.

Previous: In Us All Along

Next: Love Me Tender