The Consequence of Consumption

I watched a chilling Walmart commercial the other day. The premise: A child keeps spitting out a pacifier, which the family’s dog then slobbers all over. The kid also drops a sippy cup in the mud. The mother decides to reorder pacifier after pacifier and cup after cup instead of sterilizing the originals. The commercial ends with the dog surrounded by pacifiers and the mom patting the dog with a “What can you do?” sort of smile on her face. In the background, singers croon, “I just can’t get enough, I just can’t get enough.”

The commercial, and the message behind it, horrifies me. Particularly in the light of all our environmental problems. A friend shared a post on facebook recently depicting the state of our world’s beaches in Bali, the Philippines, Hawaii. Gone are pristine sandy shores. In their place we have cups and cutlery, we have bottles and bags. In the comments many people said, “Pick up after yourselves! Throw stuff away!” I agree, throw stuff away, but that doesn’t address the whole problem. 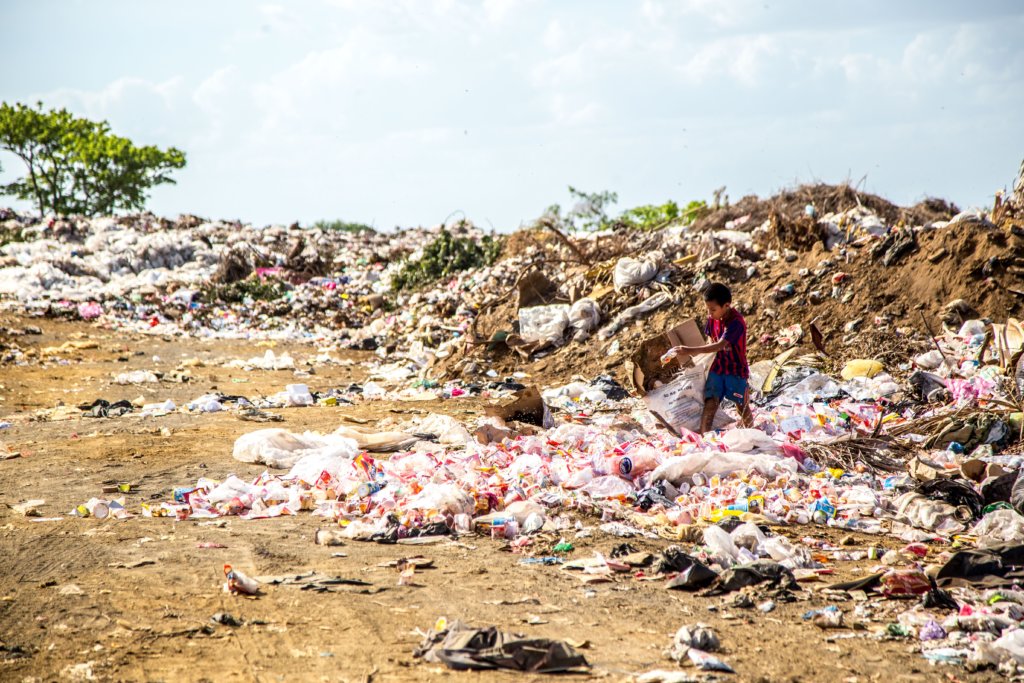 It’s not a beach, but it is a site in Nicaragua. Photo by Hermes Rivera on Unsplash.

According to Greenpeace, even when plastic waste is collected, it can blow away and end up in rivers or oceans. Major rivers around the world carry an estimated 1.15 million to 2.41 million tons of plastic into the sea every year – the equivalent of 100,000 garbage trucks. Not all of that comes from plastic blowing away, obviously it also comes from littering, but I’d like to point out the trash still goes somewhere. We think once the garbage truck picks it up the problem is solved, but it’s not. Commercials like Walmart’s divorce us from the consequences of our actions. Reordering one pacifier after another because the dog drooled all over it and throwing perfectly good pacifiers away contributes to waste. I read somewhere that the most important part of the mantra “reduce, reuse, and recycle” is “reduce,” but that doesn’t contribute to economic growth so we don’t focus on it as much.

In yogic philosophy there is a tenet called aparigraha. It means non-indulgence. Specifically, not indulging in the amenities and comforts of life that are superfluous for the preservation of physical existence. Usually people have a hard time with that one. “Does that mean I can’t buy the latest iphone? What about a new computer? Am I supposed to live in the woods off of rainwater and tree bark?” Yes! Just kidding. We can’t all live in the woods. Also, what is essential for our survival changes with time, place, and person. Perhaps 10 years ago it wasn’t crucial for everyone to have internet, but these days in my community it’s another utility like gas and electricity.

What I never grasped until watching the Walmart commercial is aparigraha isn’t about deprivation. It’s not being a martyr, living off of less so that everyone gets their fair share. Non-indulgence at least from my perspective is about Earth. It’s about paying respect to Mother Nature and realizing that my actions contribute to the destruction of the environment, and destroying the environment means more pollutants and poorer health. It means wiping out certain species. It means natural disasters like the ones we’re currently experiencing. If the environment we reside in becomes a toxic wasteland, where are we supposed to go?

I could end this post here and proclaim the planet is doomed and we’re all screwed, but I won’t. I want to again go back to one of my favorite quotes from my spiritual teacher who said, “Difficulties can never be greater than your capacity to solve them.” Did you know scientists recently created an enzyme that eats plastic? It turns plastic back into a more usable form. I’m confident more things like that will happen, but more mindfulness is required on our part. Breaking our addiction to consumerism and thoughtlessness will go a long way in creating a world in which we all want to live.

Next: Thinking of Marriage Differently