I’m digging into my archives again for this evening’s post. I’ve found this week has been all about remembering things pop when they’re ready, that as much as I would like, certain things cannot be forced. For more on patience paying off, read my latest article on Truth Leaders. Without further ado, a post from May of last year:

I moved into a new place about a week ago that’s a studio plus an office. In order to separate my bedroom from my living room, I bought a Japanese screen from Craigslist. 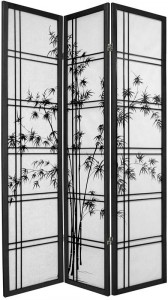 The night before I picked up the screen, I checked my wallet and all I had was $44. (The screen cost $45.) My new location is not as commercial as my other one, so I’m not near an ATM, nor is an ATM on my way to public transportation, so I wanted to avoid a special trip if at all possible. I dumped all the coins in my wallet on the floor and came up $0.26 short. I searched my whole apartment looking for the extra change. I scoured the bottom of every bag and backpack I own trying to come up with the money, running through scenarios in my head. Perhaps she would be fine with $44.74.

It struck me I should check my foreign money because, hey, you never know, right? I just got back from Italy, so maybe my American money would be mixed in. I searched my euros: nope, nothing. Then I pulled out my money from Costa Rica, a country I visited 11 year ago. Mixed in with all the coins was a $1 American coin. I kid you not. That coin was sitting in a bag at the bottom of my dresser for ELEVEN YEARS waiting for this very purpose it seemed.

The coin looked similar to this one. I hope it wasn’t a collectible.

I laughed out loud when I saw it and I think I said, “You have to be kidding me.” Things pop when they’re ready.

What’s also interesting to me is I’ve known someone for 10 years – we run in the same circles, have similar friends – and yet up until recently we’ve been acquaintances. Familiar acquaintances, yes, but I didn’t really consider him a friend. More like in between a friend and an acquaintance. Then in August, he started dating his partner and things changed. We started hanging out more and became real friends. So much so that I visited him in the hospital yesterday after he fractured his jaw while breaking up a fight. I didn’t know I felt that way until his partner sent out a mass message on facebook detailing what happened. Somehow I didn’t even question whether I would visit him, it was a given.

While at the hospital he was a pathetic sight – bandages strapped to his head, immobilizing his jaw, not able to talk. All communication was through paper. He wrote down, “Thanks for visiting me,” and I said, “Of course! That’s what you do for friends and family!” And I meant it. Because somehow we crossed the line of acquaintance and into friendship even though I’ve known him for a long time. Things pop when they’re ready.

I’m going to circle this post back to the last one I wrote “Starburst,” because I think the same principle applies. Matt Damon and Julia Roberts “popped,” they became famous when they were ready, or the universe was ready, or whatever “it” is that had to be ready. The exciting thing is we never know when the pop will happen.

I dream of a world where we understand all things in due time. A world where we know there’s no need to feel impatient because things pop when they’re ready. A world where we live each day in joy, feeling present, and alive because there is nothing more exciting than being on planet Earth when at any moment things can pop.

Previous: The Power to Choose

Next: Self-Will and the Magic Pill