Stewards of the Earth (with audio)

For the audio version of the post, scroll to the bottom.

When I look around at what’s going in on the world I feel powerless and depressed. I have to keep reminding myself things are not always what they seem, that I have more power than I think I do, but it’s incredibly difficult. I want other people to tell me happy, optimistic things, but I’m realizing (yet again) I have to do that for myself.

Yesterday, I saw pictorial evidence about how severe the drought in California is. I’m posting two of the pictures below: 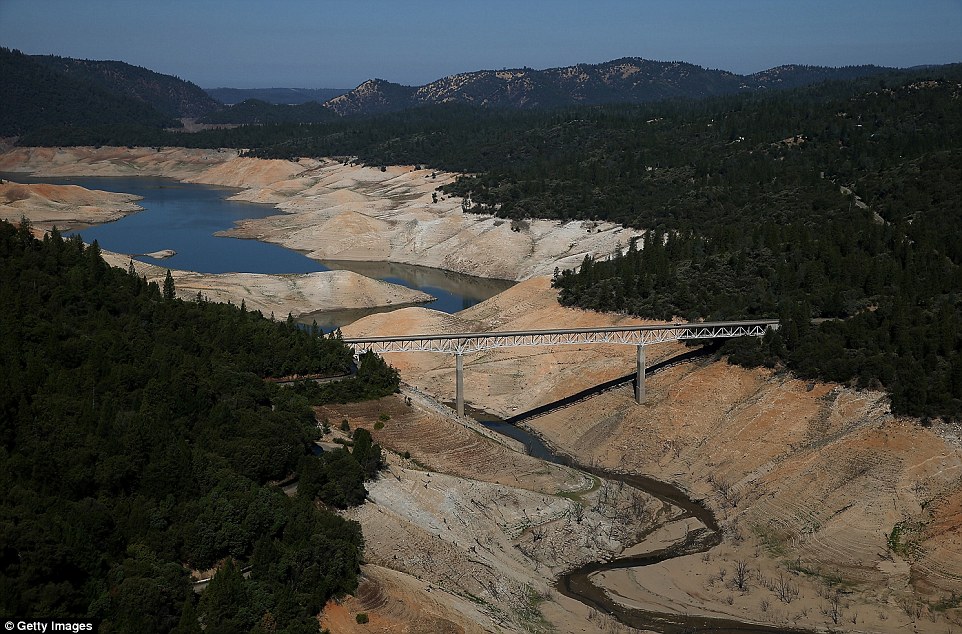 Here, the Enterprise Bridge spans the same reservoir in 2014. (Source)

Whoa. You guys those pictures are scary. This is usually where I would tell you to stop watering your lawn or to turn off the faucet when you brush your teeth, but only about 4 percent of California’s water footprint is individual, personal use. According to a 2012 Pacific Institute report, 93 percent of California’s water use goes to agriculture. When I say “agriculture” I don’t mean lettuce. I’m talking about meat. OneGreenPlanet.Org wrote an article about this and cited studies from Cornell and other places that found it takes 100 times more water to produce one pound of animal protein than one pound of grain protein.

I really hate talking about food choices because I was teased so mercilessly for being a vegetarian as a child. And I have an eating disorder so I’m really uncomfortable talking about food. However, having said that, if you are as scared looking at those drought pictures as I am, perhaps it’s time to get uncomfortable. According to the Environmental Working Group, if everyone in the U.S. ate no meat or cheese just one day a week, it would be like not driving 91 billion miles – or taking 7.6 million cars off the road.

Of course political action is also necessary, but cutting down meat consumption is something we as individuals have control over right now. And if you want to contribute even more, there’s a petition you can sign that urges the California legislature to reject any attempt to weaken, water down, or delay implementation of California’s best climate change law. If you live in New York, or plan to be in New York City in September, there’s a People’s Climate March to demand that world leaders aim high, and create the solutions we need to combat the climate crisis.

The things that give me hope about the environmental state of the world are that things like the People’s Climate March are happening, that some cities have banned plastic bags, and that the awareness about eating better has taken off. It’s a small thing, but I’ve also started blogging for Going2Natural.com where I and other women are writing about the small things we’re doing to save money and promote a more sustainable lifestyle.

This morning I woke up with the song “Ooh child things are gonna get easier” stuck in my head. Maybe it’s the universe’s way of telling me things will get brighter but only if you and I take the necessary action steps.

Previous: Taken Care of in Advance

Next: Mistakes, Martyrdom, and Me (with audio)