Taken Care of in Advance

I’ve been sharing this with people and it seems to touch them so I’m sharing it with you too.

I think I was always meant to live in my current space for a short period of time. When I first moved in my mom came down to help me get settled (bless her). We went to every big box store and thrift store around searching for things I would need to make my space more comfortable. Stuff like a standing lamp. We searched everywhere and couldn’t find one. In fact, the closest we came was a lamp at Goodwill that after the employee plugged it in, sparked and gave him an electric shock. 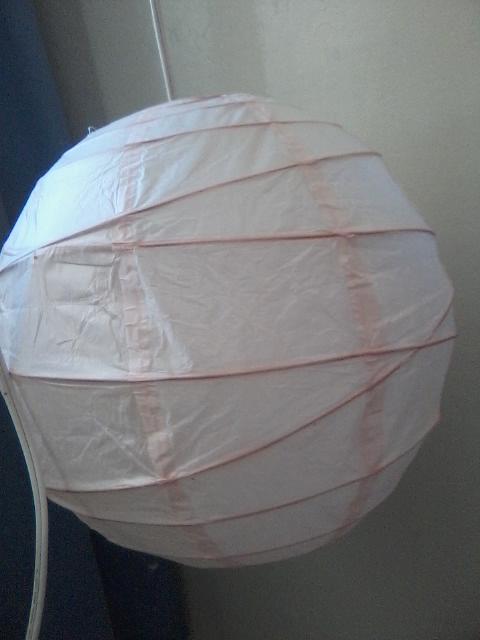 Instead of a standing lamp I’m using this paper lantern, which I had in my closet, so another instance of being taken care of in advance!

I think higher power created a block so I wouldn’t invest in my living space, in this case monetarily. I think I was prevented from finding the more expensive things I needed for this spot in particular because I was never meant to be here long.

When things don’t go my way I rail against the universe, stew in frustration, and think the whole world is against me. I’m seeing, yet again, that perhaps when things don’t go my way, it’s because they’re not supposed to. That actually, even I’m not supposed to go that way. That’s not to say moving in here was a mistake – it wasn’t – but clearly, this is a short-term fling.

Some things require hard work and patience, but I’m starting to see when there’s one road block after another, when the universe keeps putting up signs that say, “Stop. Don’t go this way,” maybe it’s because it’s better for me to not go that way! That not all obstacles are meant to be overcome. That some obstacles are the universe’s way of taking care of me.

I’m focusing on housing in this post, but I think the concept applies to other things too – jobs, relationships, opportunities. Maybe when there’s one obstacle after another after another, higher power is saying, “Turn around.” And maybe when we’re not allowed to invest financially or emotionally it’s because it’s better if we don’t. I can only imagine how angry and bitter I would feel if my landlady blew up at me and asked me to move out after I spent a lot of money fixing my place up and unpacked everything. At the moment, some of my stuff is still in boxes and there are no pictures on the walls. Not to mention, I saved almost all of my moving boxes so obviously on some level I knew this was coming. And even though I don’t enjoy this turn of events, I can still sit back and see how I’m taken care of in advance.

Next: Stewards of the Earth (with audio)