I am obsessed with progress and growth. I want to do and to achieve all the time. One of my worst fears is getting stuck, of being trapped. It should come as no surprise then I’m claustrophobic and freak out in large crowds when I can’t move as freely as I’d like. It’s not only an external fear, but an internal one.

The thing about my health is I feel stuck. There are many things I cannot do right now. As I’ve written about previously, my dreams are on hold and that suuuuuucks.

I called a friend this week to share my fears with him, and instead of dissuading me from my current perspective, he told me he’s been meditating on the tarot card the hanged man. Some would view the image of a hanged man as violent, something to fear and avoid. My friend however said he views the hanged man as being suspended instead of hanged. Of being still, in a pause, held. And perhaps the same applies to my life right now. That I don’t have to do anything, and instead of fighting the stuckness, I can enjoy the sense of ease that can arise because it’s a moment in time when the divine is holding the rope and keeping me in place. Instead of stuck, I’m held in suspension. 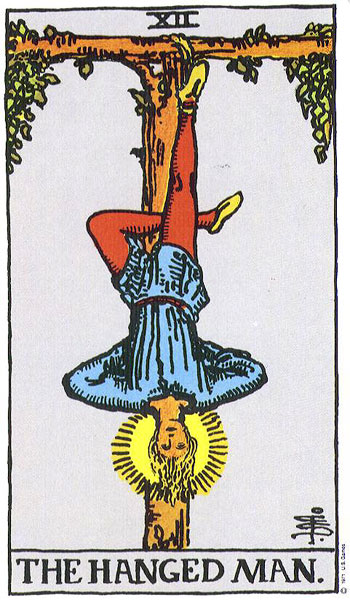 Been meditating on the hanged man. Perhaps he’s only suspended.

I like thinking of it in that way and also I’m reminded there’s more here. It’s important for me to relax while I’m suspended, to embrace the inactive part of me.

In my spiritual philosophy, there are three binding forces in the world called gunas. The forces are sattvic, or sentient, rajasic, or mutative, and tamasic, or static. All beings have a mixture of these forces within them to varying degrees. I can say without a doubt I’ve been denying the static force within me. I’ve been pretending that part of me doesn’t exist, and furthermore, not giving it expression in any way. Even when I’m at home, relaxing, there is an internal struggle within me that says I should be doing something else. Something productive. And even though I haven’t paid attention to that voice, even though I stay where I am and keep reading my book, the voice still lives within me.

This week something shifted and I’m yielding to inertia, to laziness. You would think it’s easy because, “Woohoo! Green light to sit around and watch Netflix all day!” but actually, it’s been excruciating. This week I’ve been crawling out of my skin with how uncomfortable I am. And in fact, instead of embracing laziness, on Friday night I cleaned my bathroom. So. You know. Still learning over here.

Again, as I think of my spiritual philosophy though, it’s one of wholeness and integration. One where we view everything as an expression of an infinite loving consciousness, and that means the static side too. That means the lazy, do-nothing part of me is also divine and I’m not doing myself any favors by pretending it’s not. There is a time and a place for everything, and right now, it’s time for me to be lazy without guilt.

Previous: Grace in the Gunk