Whenever life becomes challenging, my first impulse is to flee. Maybe it’s because I’m a Sagittarius. I read a meme recently where Sags described having to-go bags packed at all times “just in case.” They are ready to jet off somewhere at the drop of a hat. I don’t have a literal to-go bag, but I do have a figurative one.

As soon as I encounter a difficult situation, I fantasize about moving to Europe, or back in with my parents, or at the very least hiding under my bedcovers. The universe though is the best and worst kind of parent because instead of allowing me to run away from experiences, it forces me to confront them.

Several years ago when I had an extreme sensitivity to noise, I moved from place to place looking for my quiet, peaceful Shangri-La. It’s a little more complicated than that because some of my housing situations turned sour and necessitated I leave, but in essence I searched and searched for a great place to live. I even went so far as to move to the middle of nowhere Missouri, but even there I was plagued by noise. 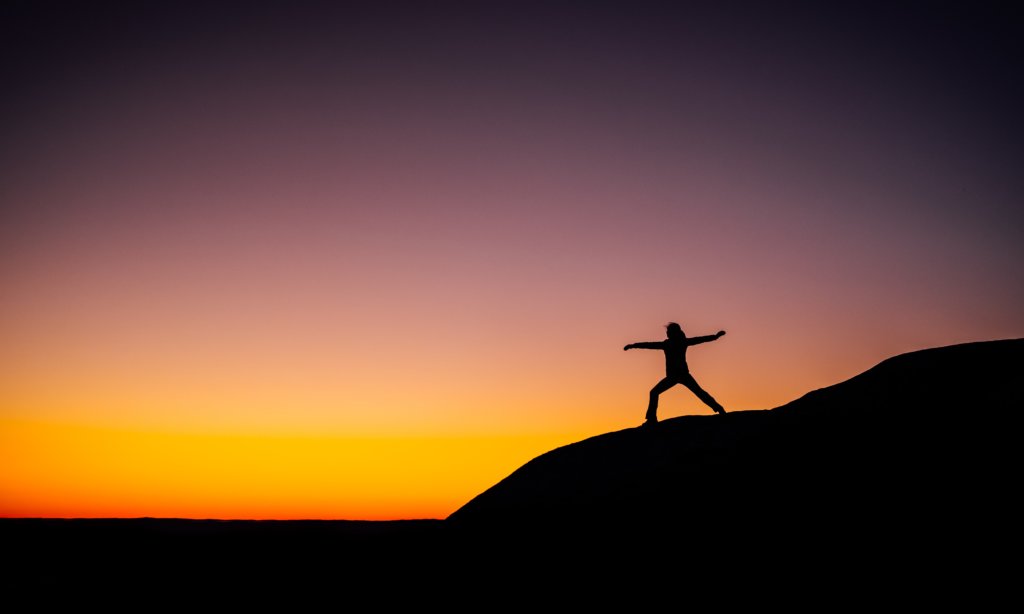 If you know yoga, you’ll get the joke — this person is performing warrior pose. Photo by Tim Foster on Unsplash

What finally squelched the problem is I built up my warrior self. I stopped turning into a meek mouse when I heard loud music. I stopped covering my ears wishing I could escape to somewhere else. To be fully transparent, all along I confronted people, telling them to turn down their music. I called the cops on my neighbor multiple times to complain about noise. I did all the things people told me to do, but the music kept playing.

On some level I think people didn’t respect me when I knocked on their door and said, “Turn down your music,” because they sensed I didn’t have any bite to back up my bark. They could tell if they pushed even a little I’d cower in fear and turn into a victim. Through therapy I have learned to hold my ground, to say no and mean it not only with my words, but with my vibration, and that’s when the music stopped.

Not turning into a victim is a lesson I continue to learn because it’s still my first impulse. Not being a victim is something supported by my spiritual teacher who wants me to be brave and to fight. He said, “Life is fight. Life is the constant fight against belligerent forces.” Later on he said, “No one can be victorious without fight: Victory without struggle is unthinkable.”

That means there’s no easy way out. That means I can’t hide under my covers and pretend things aren’t happening. It means I’ll never be victorious if I keep withdrawing from the world, thinking I can escape life’s problems. The hard truth is there’s no escape. The sooner I remember that, the easier life will be.

Next: Cracking the Ego Shell