The Enduring Myth of the Alpha Male

I learned something fascinating recently: The idea male and female wolves compete to become dominant within packs is inaccurate. This competition only occurs in zoos and not in the wild. In 1944, Rudolph Shenkel, a biologist, first observed this behavior of vying for dominance in wolves at a German zoo but in the subsequent years, David Mech studied wolves in the artic and found wolf packs are families. In other words, the “alpha male” is the dad and the “alpha female” is the mom. The rest of the pack follows their lead because they’re the offspring, not because they fought a battle and lost.

While I find this little tidbit interesting, what intrigues me more is why the idea of the alpha male and female continues to percolate in our society. I think it’s because we want to use nature as an excuse for why we do the things we do and in a patriarchal, capitalistic society, an alpha is paramount.

In a patriarchal society, men and so-called masculine traits are at the top of the hierarchy. Under patriarchy, we value strength, power, and force. The strongest, most powerful are lauded and anyone or anything considered weak and feeble is disparaged. Men are at the top of the ladder and women are at the bottom, but it’s a continuum so while men who are perceived as more feminine are looked down upon, they are still above women in the power structure. 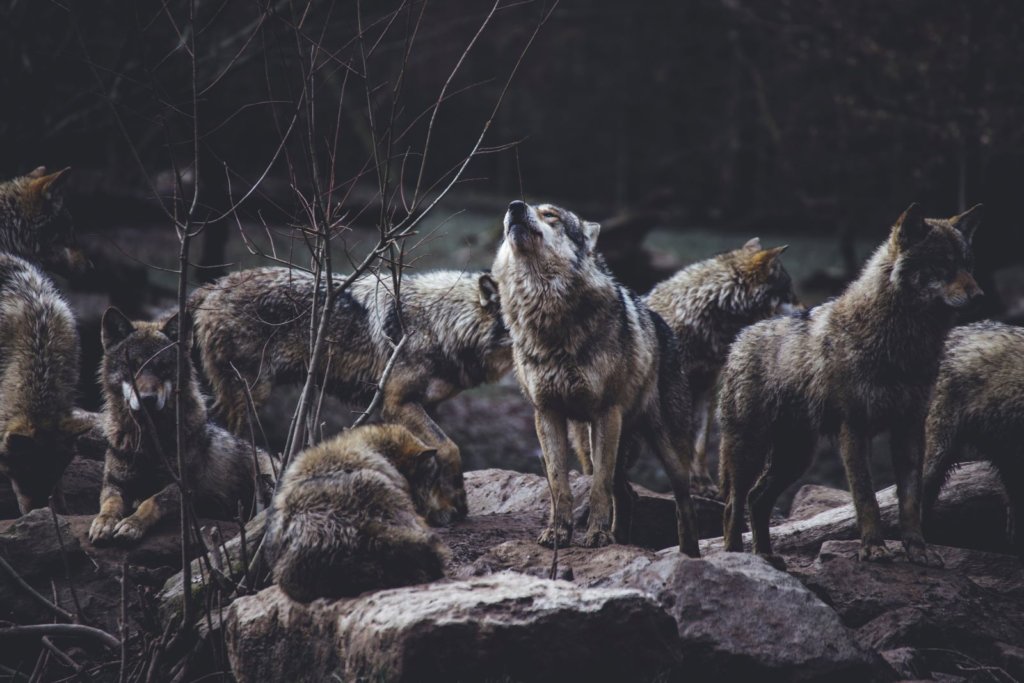 No alphas. Only parents. Photo by Thomas Bonometti on Unsplash

Through that lens, of course the idea of an alpha male is appealing because an alpha male is the epitome of what we praise under patriarchy. Capitalism feeds into the idea of the alpha because under capitalism, there’s the idea only one person can be in charge. Capitalism operates under a scarcity model – if there’s more for you, there’s less for me. That applies to not only money but power, resources, you name it.

We try to point to nature to say, “See? What we’re doing is only natural,” but over and over again, nature shows us collaboration is the name of the game. For instance, neighboring trees help each other through their root systems either directly, by intertwining their roots, or indirectly, by growing fungal networks around the roots that serve as a sort of extended nervous system. German forester Peter Wohlleben said, “If every tree were looking out only for itself, then quite a few of them would never reach old age.”

Also, bonobo females make lasting friendships and don’t tolerate aggressive males; the friendliest bonobos are always the ones with the most offspring. Ants and bees work together to make colonies and hives. I could keep going because examples of collaboration are endless. Instead of saying what we humans are doing is natural, it’s time to recognize we’re the anomaly. If we want to thrive as a species, we must cooperate with one another.

Let’s enjoy those sweet fruits and start by retiring the mode of living like an alpha. Instead, let’s continue to take our cues from wolves and live like a universal family.

Previous: Look at the Calendar, Not Your Watch

Next: You Can’t Please Everyone