The Universe is Always Communicating With Us

This blogpost has been written subliminally probably a thousand times. The notion is one of my life's guiding principles, so after watching a television episode about this very subject, I decided it was high time I write a proper post.

One of the characters on the T.V. show said, "What if the universe doesn't send us signs? What if we're just seeing what we want to see? Maybe the universe has better things to do than send us signs." I can understand why this character would say that. Heck, I've said it myself, but primarily when things didn't turn out the way I wanted or expected them too.

It's been a hard lesson for me to learn, that the universe is still communicating with me, when I don't get what I want. A few years ago I feel head over heels in love with a man who did not return my affections. I was crushed for many reasons, but the biggest was that I had received so many freaking signs and messages about this dude. I started to question everything, whether the universe really did communicate with me, whether I made the whole thing up, whether I only saw what I wanted to. 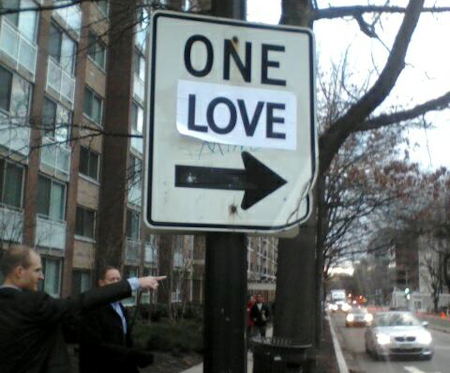 A picture I took in Washington, D.C. You would think this photo was staged but it wasn't! The guy on the left really was pointing in the same direction as the sign of his own accord!

About a week ago, I wrote a poem for the first time in years. Through this poem I came to realize all the signs and messages I received about this guy were necessary and true. Because of my heartbreak I got sober, started living in reality, and have been able to heal parts of myself that desperately needed healing. And because the universe is always communicating with us, I came across the most perfect Rumi quote days after writing that poem:

“The wound is the place where the Light enters you.”

Every time I find the perfect quote, run into a friend unexpectedly, see animals repeatedly in unusual places, etc. it's the universe communicating with me. And to be honest, I know when something is an authentic sign and when I'm trying to force it. A true sign will have a resonance in my heart. A true sign will give me the warm fuzzies. And a true sign will often appear in threes. It has been said there is a rule about threes and I find it to be true with signs as well.

I bring this all up because I think there's a belief we're separate from the world. That "the universe" is outside of us. That we're operating in different circles and why would the universe concern itself with the petty goings on of a mere person? The answer is: we're not separate. We are all cosmic stardust. We are the universe and the universe is us. So of course the universe is happy to play a part in our romantic lives because romantic love is one of the ways in which we experience the divine.

Rumi has another poem:

"The minute I heard my first love story,
I started looking for you, not knowing
how blind that was.
Lovers don't finally meet somewhere.
They're in each other all along.”

My interpretation of that poem is that the love we seek is already within us and sometimes we require another person to act as a mirror (or maybe a shovel) to bring it out of us. That exquisite feeling though, that love, is the universe in my opinion. Why wouldn't the universe want to remind us of deep, abiding, unconditional love? To remind us what we're working toward? And if we're not separate from the universe, doesn't it make complete sense the external world would be a reflection of our interior one? So when we ask a question it will be answered?

Previous: Being Taken Care Of