A Life Lesson from a Dead-End Street

I keep thinking about an essay I read in the book All I Really Need to Know I Learned in Kindergarten by Robert Fulghum. He writes about how he lived at the dead end of a dead-end street, two blocks long, at the bottom of a hill in north Seattle. At the top of the hill, two big yellow and black signs declared: STREET ENDS. And at the end of the street where Fulghum resided, another big sign with stripes and reflectors stated the obvious: DEAD END.

You could see that “DEAD END” sign a long way off – in other words, the dead end didn’t sneak up on you. However, what’s so remarkable is people drove down the street anyway and seemed to be baffled when the street did, in fact, end. 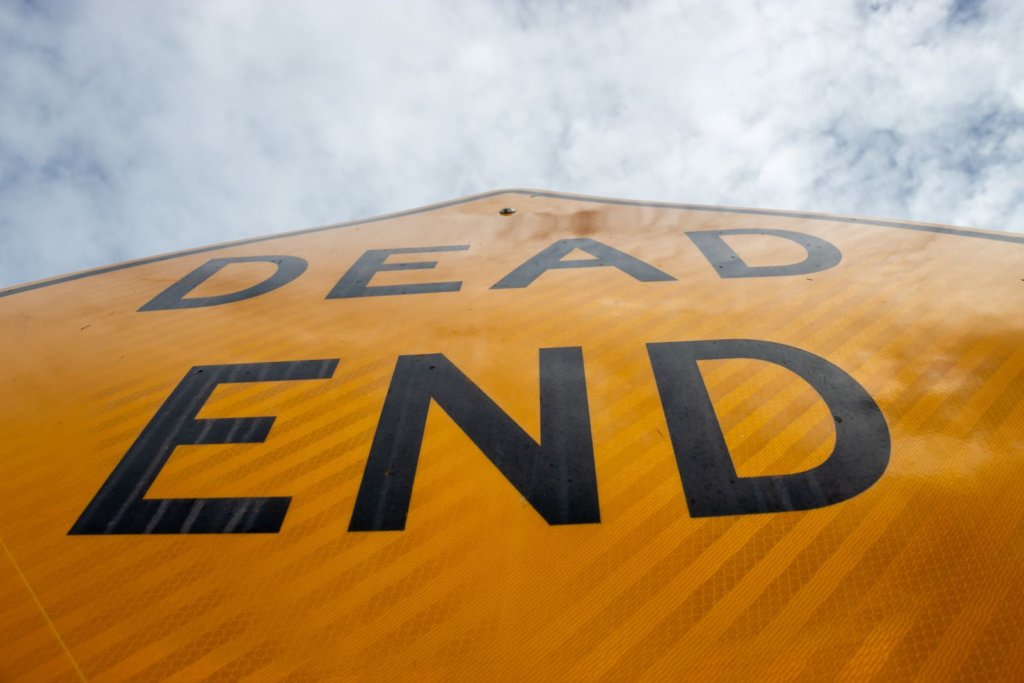 These signs are pretty obvious . . . if we accept them. Photo by Gabriel Soto on Unsplash

“Not just part way, mind you. Not just to where the reality of the situation cleared up. No, sir. They drove all the way down, right up to the sign, the big black one with stripes, the one that said DEAD END.

“And they read that sign two or three times. As if they were foreigners and had to translate the English. They looked on either side of the sign to see if there was a way around it. Sometimes they sat there for two or three minutes adjusting their minds …. There was no pattern. All kinds of vehicles, all kinds of people, broad daylight and pitch dark. Even a police car a couple of times. And once a fire truck.

“Innate skepticism or innate stupidity? I confess I do not know. A psychiatrist friend tells me it’s a sample of an unconscious need to deny – that everyone wants the road or The Way to continue on instead of ending. So you drive as far as you can, even when you can clearly read the sign. You want to think you are exempt, that it doesn’t apply to you. But it does.”

His last two lines especially strike me. We want to think we are exempt, that whatever we’re confronting – a dead-end street, a deadly virus, whatever – doesn’t apply to us. But it does. I’d wager the majority of us want to feel special. We want to be right, to know the truth, and even when there’s evidence demonstrating we’re wrong, we can’t accept it. Why is that? I think one reason is U.S. culture doesn’t have many examples of people saying, “I don’t know.”

Instead of saying, “I don’t know,” we make something up, we pretend to know. We try to save face versus practicing humility and admitting, “I don’t know,” or even, “Maybe I’m wrong.” Who says maybe I’m wrong these days?!? I can’t remember the last time I heard in a public space someone open to the possibility they don’t know everything. It’s as if due to the internet and having so much knowledge at our fingertips we’re loathe to say, “I don’t know” or “I could be wrong.”

Also wrapped up in “I don’t know” is fear, in my opinion. My spiritual teacher says, “Humans do not fear to tread a known path, but they always hesitate and fear to travel unknown paths.” Sometimes those unknown paths are intellectual ones. It’s far easier to cling to a thought or belief you learned early on and is corroborated by friends and family than to change your mind and believe something new. I, for one, value bravery and I want other people to be brave too. I want us all to say “I don’t know” and “Maybe I’m wrong” when that’s the truth for us. And also, to pay attention to evidence when it stares at us in the face. We’d all be better for it.