Belonging is on my mind a lot these days. I think in part it’s because I’m still unemployed. I interview somewhere and they assess whether I’m a good fit for them and I assess whether they’re a good fit for me. Thus far nowhere has been a match. It’s tough to be rejected so many times, especially when the stakes are so high. The way our society is set up you have to have money to survive. I realize there are workarounds with bartering and such, but my electric company isn’t keen on receiving an astrology reading in lieu of payment for my electric bill. So. Gotta have that green.

You know how some people talk about eating rejection for breakfast? Or how some authors kept all their rejections from publishing houses as an “I’ll show them” gesture? Yeah, I’m not one of those people. Each rejection stings and with each rejection I take it as a personal affront there’s something wrong with me. “What did I say wrong during the interview? What was bad about my résumé or writing sample?” Everything becomes about me and a reflection of how I’m terrible. 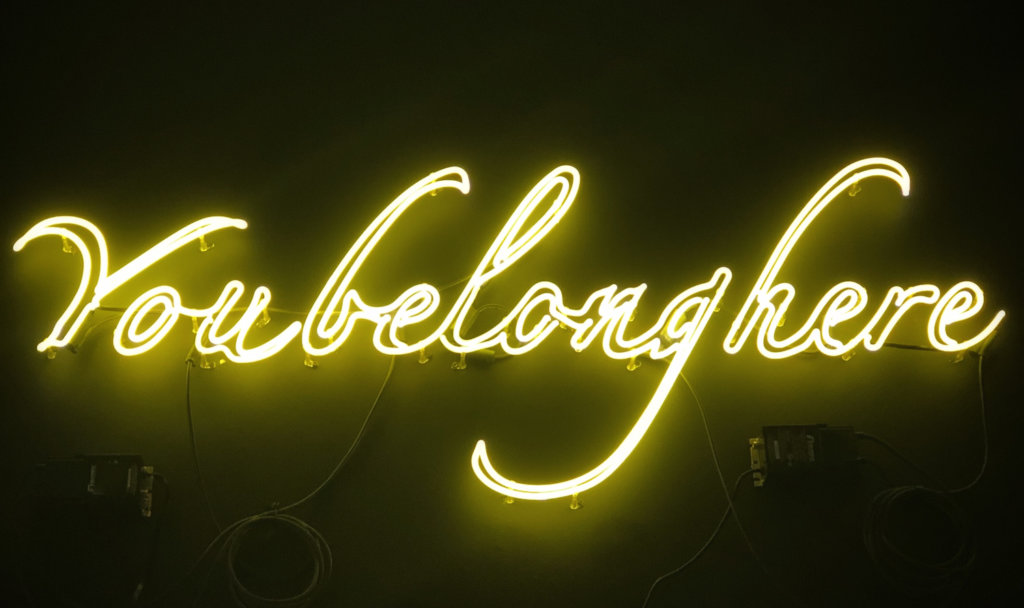 An apropos sign. Photo by Amer Mughawish on Unsplash.

This shame-based place culminates in feeling like an outsider because if I’m wrong then someone else is right. There must be a “correct” way to do things, right? Except what keeps knocking around in my head is my post from last week — how the universe comes to know itself through me. If that’s true, can I truly be wrong or right? Can I really be an outsider?

While watching a youtube video of Charles Eisenstein talking about the burning of the Amazon, he said there’s a larger intelligence that knows where to put you in its healing. As soon as he said that, my eyes welled up because it reminded me my life is so much bigger than me. Maybe I’m right where I am meant to be, even if that’s jobless. And also my placement at a company is not only about my skills and talents, it’s also about where I’ll be of the most use, the most service, the most healing.

Where I fit, where I belong, is not only where I want to be, what I want to do, it’s also about the universe or my higher power. Where does higher power think I should be? Where does the universe think I’ll be of most use in coming to know itself and also for its healing? I belong where I am. If I’m here, now, that’s where I’m meant to be. It’s a hard pill to swallow because sometimes the present moment is painful but that doesn’t mean something is out of sync. After all, just think of childbirth.

I wish I could say after writing this post I suddenly feel completely at home and at ease in my self, my body, my life, but I don’t. What I can say though is I feel marginally better that’s good enough for me.

Previous: The Unfolding of Me (and You)

Next: In the Hallway