The Value of Humanity with the Rise of AI

Artificial intelligence (AI) has been on my mind because as you’re likely aware, the Lensa AI app that creates “magic avatars,” or in other words digital art, went viral and jumped to number one in the Apple App store recently. Not only that, ChatGPT gained more than a million users in five days around the same time. The AI program can create A+ academic papers and Netflix-worthy scripts.

It’s both exciting and terrifying. Terrifying because as a writer and an artist I’m starting to wonder, “Will I be obsolete soon?” And sure, AI could save me a lot of time and replace the boring writing I don’t want to do anyway such as “compare and contrast the best-selling fertilizers currently on the market,” but still. When I think about AI, my stomach clenches and my whole body gets tense. If AI can do what I do, only better in some instances, what does that mean for me?

The first, obvious answer is I’m so much more than what I do. I’m not only a writer. I’m a daughter, a sister, a friend, etc. The relationships I have with people matter, a machine cannot yet replace my presence, but also the essence of who I am matters. Regardless of whether I never write another word again, I have existential value. My spiritual teacher says over and over again, “Nobody is unimportant, nobody is insignificant. Each and every existence is valuable.” So there’s that. 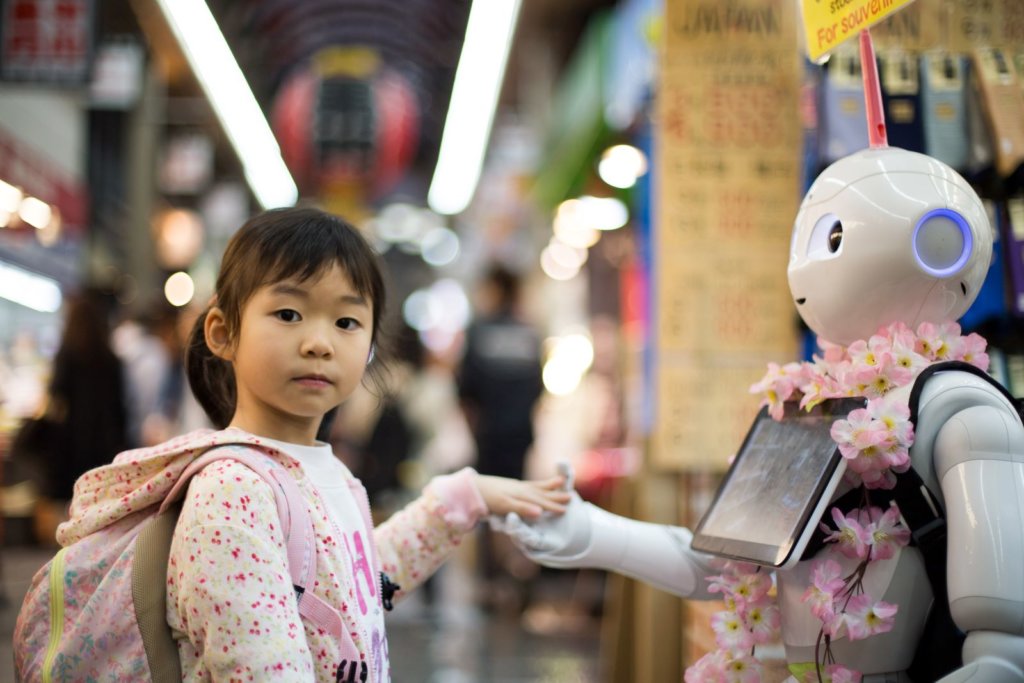 Humans and robots. More to come. Photo by Andy Kelly on Unsplash

But there’s also a more intangible something I bring. Cosmic consciousness, Brahma, Source, whatever name you have for it, is coming to know itself through me. I am in partnership with the divine to create something new. AI by its very nature is derivative. You literally have to feed AI loads and loads of information for it to “learn.” AI pulls from what’s already in existence and that is one of the criticisms of Lensa AI – it sampled from human artists without acknowledging or paying them for their work.

As a human being, I can create something new. I can be a conduit for the divine. Indeed, my spiritual teacher says artists are pioneers. They are at the vanguard of society, leading them toward “true fulfillment and welfare by providing the inspiration for service.” Art is not just about showcasing what’s inside my own head, but a way to spur people forward, to inspire, to encourage, and to hopefully put people in touch with something greater than themselves.

Another quote for you: Artists “have to cleanse all that is turbid, all that is inauspicious in individual life in the holy waters of their universal mentality, and then convey it sweetly and gracefully into the heart of humanity. Herein lies the fulfillment of their service, the consummation of their practice.”

How can AI possibly convey a universal mentality sweetly and gracefully into the heart of humanity? How can AI talk about the touch of the eternal and hint at something that lies beyond the mind when it’s not something to comprehend but rather feel and experience? It can’t. Not unless it copies a human being and therein, once again, my value is evident.

Previous: You Can’t Please Everyone

Next: A Culture of Love and Justice