While watching a movie that addressed publishing the Pentagon Papers, what struck me the most is multiple presidential administrations maintained U.S. involvement in Vietnam because they didn’t want other countries to lose respect for us. Setting aside how screwed up that is, I can’t think of a single country that still has respect for the U.S. OK, maybe Brazil, which also has a fascist leader, but otherwise the pickings are slim. These days Trump doesn’t seem to care one iota what other countries think of the U.S. and instead only cares about appealing to his base: primarily white, Christian men who are racist.

I want to address that term, racist. Robin DiAngelo, author of White Fragility, said, “We have to stop thinking about racism simply as someone who says the N-word.” Meaning it’s possible some Trump supporters (but not only his supporters) are racist but think they aren’t because they don’t use the N-word or they have friends who are people of color. Racism is a system that benefits white people – it’s prejudice plus power. And white people who want to maintain the status quo are supporting racism.

Trump does not fall into the camp of someone who is unaware he’s racist; he’s blatantly so. One only has to look most recently at his decision to hold the now-moved rally in Tulsa on Juneteenth as evidence of that. If you don’t know, Tulsa is the site of one of the worst incidents of racial violence in the nation’s history. In 1921, hundreds of black people were attacked by a white mob that looted and burned many black-owned businesses and homes in the Greenwood District, a neighborhood that was then known as “Black Wall Street.” 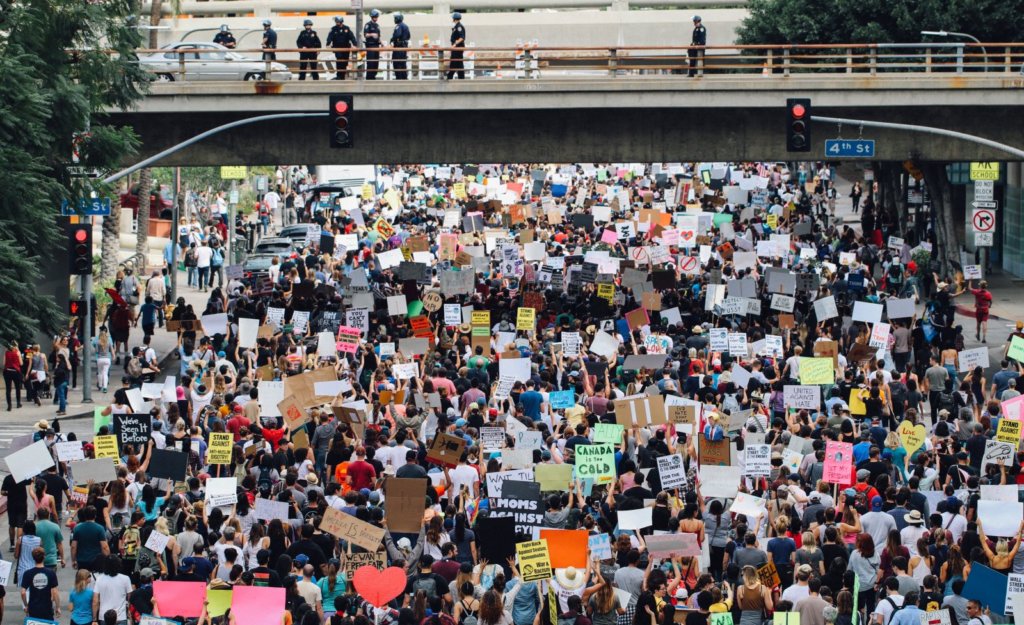 Power to the people. Photo by Alex Radelich on Unsplash

Trump’s racism is calculated and it’s precisely why he’s in power. Back in 2017, the Atlantic published an excellent essay by Ta-Nehisi Coates, an excerpt from his book We Were Eight Years in Power. Coates said, “In recent times, whiteness as an overt political tactic has been restrained by a kind of cordiality that held its overt invocation would scare off ‘moderate’ whites. This has proved to be only half true at best. Trump’s legacy will be exposing the patina of decency for what it is and revealing just how much a demagogue can get away with.”

Coates said Donald Trump is the first white president because he “moved racism from the euphemistic and plausibly deniable to the overt and freely claimed.”

It was true in 2017 and it’s still true now. How much can a racist demagogue get away with? Especially when he’s no longer pretending to be a decent man, to care about what other people or other countries think of him? The answer as we’ve seen is quite a lot.

A part of me wants to fast forward to 2021 when I sincerely hope Donald Trump is out of office, but the reality is, what Trump embodies doesn’t go away with a new president. He’s merely a symbol of what’s been here all along. It’s up to us to create a more just society and also to remind elected officials they work for us and not the other way around.

I’m heartened by the current protests because that dynamic is playing out. When the Minneapolis City Council unanimously passed a resolution to replace the police department with a community-led public safety system, it was a signal that public outrage can make a difference.

There is power in the collective, both good and bad. We can either use our collective power to maintain the status quo, to support inequality of all kinds, or we can do something different. We can band together to create a world we’d like to see. I, of course, want that better world.

Previous: We are Made to be Different

Next: Embracing our Humanness